I was somewhat amused to read that Tom Watson, Labour’s Deputy Leader, was going to “investigate” fake news sites. I was even more amused when I discovered that he’d appointed Michael Dugher, a man who has already penned articles for The S*n to lead the, er, inquiry.

Like many other Twitter users, I asked Watson if his investigation was going to look at the production of fake news stories in The S*n, The Daily Mail and the Daily Express. I have yet to receive a reply.

So what is ‘fake news’? Doesn’t the British press publish fake news stories on a daily basis? Apparently the first focus of this ‘investigation’ is The Canary, a site whose business model is essentially based on clickbait-style headlines. Many of The Canary’s articles tend to be drawn from other stories that are arranged to produce a particular narrative (a lot of bloggers do it). It’s mostly comment.

It is also claimed that The Canary carries links to conspiracy theories but after a quick look around the site, I have failed to find any. However, it would be fair to say that The Canary is rather pro-Corbyn. Perhaps this is what Watson hates the most about the site. But being pro-Corbyn doesn’t mean The Canary is guilty of producing ‘fake news’ stories. Yet, this question of informational fakeness begs the question regarding the conspiracy sites run by Alex Jones. These include Prison Planet and Infowars. What about them? Aren’t they guilty of producing ‘fake news’? Watson and Dugher may find it harder to pursue Jones because he lives in the United States. The Canary is based in Britain.

So what about the fake news produced by official news outlets? The BBC has also produced fake news stories. Take the Battle of Orgreave, the BBC stitched together footage to give viewers the impression that the militarised police were being charged by a violent mob of miners. The reverse was true.

British newspapers routinely make up news stories and some are more guilty of this than others. This infamous front page appeared in The Sunday Sport in 1988. 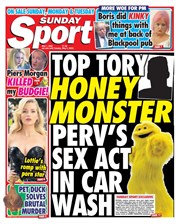 The Daily Express is best known for its front page health scare stories and its slavish devotion to the Cult of Diana. It also supports UKIP and frequently prints hate stories about “loony lefties” and “luvvies”. This June, it published its Top 10 of ‘barmy’ EU decisions. They were either fake or sensible decisions.

One of the most persistent myths served up as a truth is the ‘straight banana’ story produced by Boris Johnson, a man who regards the £200, 000 for each article he writes as “chicken feed”.

Two years ago, The Daily Express published a fake news story that claimed that “half of all British Muslims supported ISIS”. The story was later pulled from its website. In 2011, its sister paper, The Sunday Express claimed that the EU wanted to “merge the UK and France”.  This prompted Roy Greenslade to write in his Guardian column that “nothing could be done” about these stories. Why not? Aren’t these papers equally as guilty of misinforming the public as the supposedly fake news sites?

Like the Daily Express, The Daily Mail is a tireless publisher of hate stories and has spent the best part of its history stirring up hatred of minorities. Last year, it printed a story that claimed Ralph Miliband “hated” Britain. There was no evidence to support this claim and even in the face of criticism from many quarters, it was unrepentant and even went so far as to repeat its spurious claims.

It would also appear that some people are unable to tell the difference between satire and fake news.  The Daily Mash, Newsthump, The Onion, Waterford Whispers and other sites produce satirical stories that resemble news stories. There is a point to this:  to satirize the so-called ‘free press’ one needs to adopt its motifs and ridicule them. Will Watson and Dugher pursue them too?

Media Studies is often derided by its critics as an “easy subject” that permits students to “ponce about with video cameras”. The real reason its detractors in the press and the political world hate the subject so much is because it provides students with the tools to analyse and critique the media. The last thing these two groups of powerful people wants is a media savvy public that calls out bullshit when they see it.