We Must Listen To The Will Of The British People!

Since the EU referendum in June, Westminster politicians have been fond of telling us how they “must listen to the will of the British people” with regards to the referendum result. This claim overlooks the fact that Scotland, Northern Ireland and many cities in England voted to remain, and now these parts of the country are being ignored to pander to anti-immigration and anti-European sentiments – all of which have been whipped up by lazy thinking politicians who are interested in nothing less than consolidating and/or extending their power.

But what about those parts of the country that voted to remain? Don’t they matter? Apparently not. 52-48 is not a landslide by anyone’s definition.  Remember when Nigel Farage told everyone that if the result was close in favour of remain, he’d demand a second referendum? Make no mistake, had Remain won by a similar margin, the mass media would have tirelessly promoted his demands for a second referendum. All must prostrate themselves at the feet of The Grand Farage.

What this claim also reveals to us the fact that Westminster politicians suffer from a form of selective hearing loss when it comes to other, more pressing demands from the British people. A properly funded National Health Service, more social housing, proper jobs, decent wages, a progressive tax system, nationalization of the railways and proper functioning public services are all things that the British people want, but to which Westminster routinely turns a deaf ear. Yet, apparently, when it comes to Brexit or ‘pulling up the drawbridge’, these politicians have suddenly regained their hearing. Funny that.

Before the referendum we were told that this was “the most important moment” for the British people.  What? It was more important than people having somewhere clean and decent to live?  Really?

The ruling Tory group of Hammersmith and Fulham Council are a nasty, mean-spirited bunch. Their blatant classism and disgust for those whom they see as inferior (that’s ordinary working class people, benefit claimants and homeless people) has marked out the council as one of the cruellest in the country.

In the last day or so, the council has been sending out these cards to council tenants.

Happy Christmas from your overlords.

Yesterday, Cllr Andrew Johnson, the council’s cabinet member for housing appeared on BBC London News to defend the local authority’s decision to send these cards. His manner was bullish, unrepentant and stridently classist. Remember this is the council where you will find Tory councillors referring to tower blocks as ‘vertical slums’ and the council itself working flat out to reduce to amount of council housing stock within the borough.

I was contacted by Tina Buckley, whose mother is a council tenant of some 60 years and has never been in arrears with her rent. Tina appeared on BBC London 94.9 where she was due to confront Cllr Johnson about his council’s Christmas cards. The ordinarily pugnacious Johnson  took the coward’s way out and declined an invitation to appear.

Let’s remind ourselves of Cllr Johnson’s past musings on council housing. From The Evening Standard, 2 October 2012.

“We believe that the notion of a tenancy for life is outdated and that it’s wrong to expect to inherit a welfare benefit in the form of a subsidised house irrespective of housing need.

“Instead, we want to give honest, hard-working, local residents on low to middle incomes, who make a positive contribution to their local communities, the opportunity to access social housing.”

On Conservative Home, Johnson penned an article that outlined his thoughts about the housing shortage:

That’s why we’re doing all we can to increase the supply of homes to buy for local people on low to medium incomes, through new delivery using council land and assets. We already have a significant amount of social housing, but it needs to be used more effectively. It’s why we’ve brought in fixed termed tenancies and given far greater priority for those in work rather than on welfare. What we really need is more housing for the middle market and at long last we have the figures to prove it.

There’s little, if any, mention here of homes to rent. The council knows that those on low to medium incomes cannot afford the borough’s vastly inflated house prices and will regularly trot out weasel words like these. There are new developments all over the borough and many of the properties within them will be sold to Chinese investors. If LBH&F could get its way, it would sell off all of its council housing (it’s been transferred to a so-called ‘arms length’ management company or ALMO) to foreign investors for redevelopment.

In last October’s edition of Inside Housing, Johnson said:

‘The old, antiquated system has created disadvantaged communities by producing concentrations of people on benefits with disproportionately high levels of unemployment and sometimes social breakdown.

‘In its place, we want to create neighbourhoods where a broad mix of social households all live side-by-side.’

Classism writ large. There will be no “broad mix of social households” if the council gets its way.

Time and time again, the new crop of Tories have shown themselves to be bullies. Unable to fathom what life is like on a low income, they would rather engage with fictional characters and myths than real people. If people are finding it hard to pay their rent, in Tory eyes, it’s because they’d rather spend their money on flatscreen televisions, booze and iPhones than on their rent. This card is nothing less than an attempt to bully people. It also deliberately ignores the economic plight of many of those who are housed by the council, whose stagnant incomes have failed to keep pace with the spiralling cost of living.

The Cowan Report also has the story here.

Next May, we have a chance to vote this current Tory administration out.  Let’s do it.

Comments Off on Nightmare on King Street (Part 16) 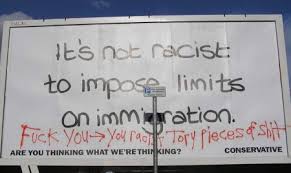 Michael Howard’s “Are you thinking what we’re thinking” backfired.

I can’t count the number of times I’ve seen the statement “I hate it when people use the word ‘racist’ to shut people up” or something like it when racists are challenged on their abhorrent views.  I often see statements like this on the comments threads on Telegraph blogs or Huffington Post. The funny thing is, the ones who use that statement will often say something really racist in the next sentence.

Racists don’t like to be called racists. That’s understandable. It’s a pretty horrible word but then racists are pretty horrible people; there is really nothing nice about them. Scratch a racist and you’ll likely find a sexist, an anti-Semite and a bully underneath.

Then there are those who use weasel words to claim they aren’t racists but actually succeed in achieving the opposite of what they’d intended to do.

Here is my Top Four.

The first one attempts to refute the charge of racism but fails to work, because when the phrase “my own people” is used it refers to a specific ethnic group. It also implies that the speaker loves every person who shares their pigmentation regardless of never having met them and regardless of their ideologies. The speaker fools no one but him/herself.

The second one uses the compound word “ethno-nationalist” to claim that the speaker isn’t racist but some kind of nationalist. But the construction of this compound informs the reader or the listener, that only one ethnic group can have citizenship bestowed upon them – in other words, the ethnic group of the speaker.

The third phrase is fairly common and was used by Michael Howard when he was leader of the Tory party (“Are you thinking what we’re thinking”?). The trouble with this innocuous looking phrase is that it is used to deflect attention away from some pretty unsavoury notions. More often than not the phrase will be accompanied by revealing remarks like “swamped” or will make a reference to hygiene or contamination.

The fourth phrase is a favourite of Telegraph commenter, “danoconnor” and has been adopted by others. There are two things about this phrase that interest me. First, there’s the insistence that anti-racism campaigners hate white people or that anti-racist efforts are directed against whites. No, we hate white people who are racist. There’s a big difference.  Second, it suggests a well-developed sense of victimhood on the part of the speaker who will also make the claim that most violent crime is committed by blacks on whites.

Perhaps the worst excuse that I’ve heard is “racism is natural”. Yes, someone actually said that on Telegraph blogs. He then proceeded to compare the entire country to an enormous village where they’re suspicious of strangers and lynch them upon sight. “Us simple folks don’t take kindly to yo metropolitan Fancy Dan ways ’round here, fella. Now git yo ass outta here or git it lynched”.