No British troops on the ground in the Sahel? 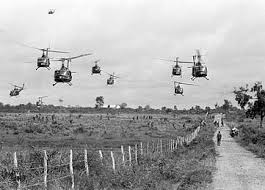 US involvement in Vietnam began with sending military advisers and look what happened.

Since the French military adventure in Mali began, we’ve heard a lot from Dizzy Dave Cameron about how British troops will not be sent to the Sahel to serve in a combat role. So the other day when I heard Britain was to dispatch 330 soldiers to the region in an “advisory” capacity, I was reminded of the US’s involvement in the Vietnam War, which began in 1956 when Eisenhower sent “military advisers” there to “train” the Vietnamese forces. In actual fact, advisers and observers had been sent there in 1950 by Truman to support the French efforts but in small numbers.

In 1954, the Americans and the French installed the puppet president, Ngô Đình Diệm in Saigon (he won a rigged election). He had impeccable anti-Communist credentials and was a Roman Catholic. An ideal choice for a country with a large Buddhist population. Opposition grew to  Diệm’s rule and by 1957, there was a full-scale insurgency. Diệm responded by torturing and killing those whom he believed were Communists. Such was his popularity, that he faced two assassination attempts. He was finally killed in 1963 in a CIA-supported coup and was replaced by Dương Văn Minh.

When Kennedy became US president in 1961, he sent more “military advisers” to Vietnam to support the Army of the Republic of Vietnam (ARVN). My father was part of a contingent sent to Saigon in 1963. When Kennedy was assassinated in the same year, Johnson sent even more troops to Vietnam and by 1965, he’d escalated the war. You know what happened next.

The sending of “military advisers” to another country to counter “insurgents” is never a good sign. The Cat suspects that British special forces have also been sent to Mali and neighbouring Niger. Today, Cameron has flown to Algeria to have talks with his opposite number, Abdelmalek Sellal. No prizes for guessing what they’ll be talking about.

The Globe and Mail reports that Canadian special forces are already in Mali to “protect the country’s diplomats”.

The US has negotiated a deal with the Nigerien government to establish a base for its unmanned drones.

Carter Ham… you’ve got to love that name. AFRICOM was established in 2006.

The new scramble for Africa is under way and ordinary people will get caught in the middle while the US, France, Britain, Canada and the rest of them slug it out with China and India (yes, India) for the continent’s resources.

Anyone for yellow cake uranium?

Hague – there won’t be any boots on the ground…

…except for the ones that are being worn by the ‘military advisors’.  The dispatching of ‘advisors’ is often a prelude to a full-scale war. In the late 1950’s, the US sent advisors to what was then Saigon before the escalation of the Vietnam War in 1965. Truth be told, the US provided more than just “advisors”, there was a sizeable military presence in Vietnam before 1965. Indeed my father was stationed at Tan Son Nhut Air Base in 1963.  So when people tell me that the Vietnam War started in 1965, I know better.

This conflict began with so-called “no fly zones”, which are also precursors to a full-blown war. I do find it odd, that within this “no fly zone”,  Libyan ground forces are being attacked.  I mean, when was the last time you saw a flying tank or a flying howitzer?

We were told that “regime change” was not part of plan in Libya but it seems as though this has been the intention all along. The UN Security Council resolution that authorized the “no fly zones” did not call for regime change but you can bet your bottom dollar that that’s the plan. Scameron wants it.  Sokrazy wants it. Even Obomba wants it.  Although the public has been told that this “isn’t about oil”, the fact of the matter is that it is about oil. The last time anyone said “this isn’t about oil” was in the run up to the Iraq invasion and guess what? It was about oil. Blair and Bush lied.

Well, it seems that there were special forces boots on Libya soil as well as those of the very special advisors. I wonder, could there have been more of them? Boots, I mean. Possibly. Anything’s possible.