The Miliband speech: one crumb of comfort in amongst the neoliberal detritus 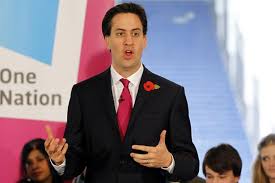 Picture courtesy of the Daily Mirror

Well, it’s really nice of Ed Miliband to stand up for tenants who are being screwed by unscrupulous private sector landlords. Thanks for the warm words, Ed, they mean so much. And yes, I’m being sarcastic. That is my wont.

Labour has not pledged to reverse any of the Tory cuts, indeed if they won the next general election they will continue cutting, slashing and capping. I had a look at Miliband’s speech he gave to the Fabian Society (the fact that he spoke to the Fabians should tell you all you need to know) on Saturday and there was nothing to get excited about. In his speech he apparently fleshed out his “One Nation”, er, vision.

I will quote some of the speech, starting with this extract.

New Labour rightly broke from Old Labour and celebrated the power of private enterprise to energise our country.

You will notice how he uses the Tory-coined phrase “Old Labour” here. It’s as if to say that anything the Labour Party did before the arrival of Kinnock and Blair was bad or wrong. What about the National Health Service? I could list other achievements but the NHS is certainly a great achievement for a country that was, ostensibly, broke. The celebration of “the power of private enterprise” led to the disastrous reliance on the Private Finance Initiative, which effectively led to the wholesale destruction of the NHS. It licensed carpet-bagging on a massive scale. In short, it was a failure. The only thing it “energised” were greedy businessmen.

It helped get people back into work, and introduced the minimum wage and tax credits to help make work pay.

And it used tax revenues to overcome decades of neglect and invest in hospitals, schools and the places where people live.

The National Minimum Wage (NMW) was seen as a great achievement by the New Labour government but it wasn’t a living wage and was never going to be. Of course, the Tories opposed the NMW and continue to do so. Many Tories, especially of those of a free-market bent want to scrap the NMW altogether and force people to accept sweatshop wages with no workplace protection.  Speaking of workplace protection, New Labour refused to reverse the draconian anti-trade union legislation introduced by the Thatcher government. Workers continue to find themselves under attack by a ruthless and venal government that pits worker against worker and dares to offer them pitifully worthless shares in return for compliance. if it could get its way, the Tories would take us back to the 19th century… and Labour would let them.

The word “responsibility” appears several times during the speech. This word is much beloved of neoliberals and is, more often than not, applied to those at the bottom.

To turn things round in Britain, we all have to play our part.
Especially in hard times.
We are right to say that responsibility should apply to those on social security.

This language is no different to that used by the Tories. The suggestion here is that those on social security are universally “irresponsible” rather than victims of circumstance – which is often the case. But he throws in the following decoy to distract those who would seek to pick holes in his argument.

But we need to say that responsibility matters at the top too.

That’s the essence of One Nation Labour.

It shares New Labour’s insight about our obligations to each other.

And it learns the lessons of what New Labour didn’t do well enough, ensuring responsibilities go all the way through society from top to bottom.

Here, Miliband appears to suggest that his One Nation Labour brand is an extension of the New Labour brand. If you thought Miliband’s Labour Party was any different to Blair/Brown, think again. The ingredients on the label are exactly the same but with a couple of new additives… and the new brand name.

New Labour began with a bold agenda for the distribution of power in Britain.

And it stood for a Labour party not dominated by one sectional interest, but reaching out into parts of Britain that Old Labour had never spoken to.

Again, Miliband distances himself from so-called “Old Labour”, that’s the same Labour Party that legalized homosexuality and abortions under the rather right-wing Labour Home Secretary, Roy Jenkins. It’s been said that if such proposals were put to the Commons today, they would be voted down.

Miliband came from a relatively a privileged background. He went to Oxford and like many of those who were intent on a career in politics, he read (they don’t study at Oxbridge) Politics, Philosophy and Economics (PPE). He tells us that the Labour Party will be

Recruiting MPs from every part of British life: from business to the military to working people from across every community.

With most of Britain’s mines and factories closed, it’s hard to see how Miliband can recruit more Dennis Skinners. It sounds like a load of guff to me.

All in all Miliband’s speech was crafted to appeal to the Fabians and placate those so-called floating voters whose  political allegiances change with the wind. Fabians believe that they can reform capitalism. They are mistaken and have been wrong for more than 100 years. Their gradualism has led them to betray the working class and the labour movement time and time again.

On the one hand, Miliband is a hostage to the Blairites and on the other, he’s running scared of the Tory press (ably assisted by Hatchet-job Hodges in the Torygraph), who pore over his every word, hoping to find a way to paint him as a closet Commie. It’s quite laughable and, at the same time, it’s tragic.

There really is nothing Red about Ed.