The Weasel Words and Faulty Logic of Michael Heaver

I was looking at Telegraph blogs this morning when I spotted this blog by Michael Heaver.

Heaver describes himself as:

… a political commentator who campaigns for Ukip.

Michael Heaver is standing to be UKIP MEP in Eastern England. He blogs for The Telegraph and was Young Independence’s first elected Chairman.

Heaver’s blog has the deliberately provocative title “Britain is massively in debt with major youth unemployment. What do we do? Throw open our borders”. This is enough to get the racists, fascists and closet weirdos out in force.

Scientific racist, Roger Hicks, can’t resist an opportunity to plug his book and repeat his usual spiel about the need to preserve the purity of the British ‘race’ (sic).

When the numbers were small, handing out British citizenship to a few people of different race and culture to our own wasn’t an issue, like adding a few drops of colour to a very large pot of white paint: you are still left with a pot of white paint.

But this is not what has happened. Colour has been added by the cupful, providing a temporary “rainbow” (or “kaleidoscope”! as John Bercow would call it) of colour, but so much that if we stir it in (which we are constantly being encouraged to do), we will no longer have a pot of white paint, i.e. will destroy the ethnic identity of Britain’s ancient native (white) population . . .

It is high time we faced up to this reality, instead of dismissing any reference to it as “racist”, or ridiculing the importance of skin colour as an indicator of ethnic identity (fine for black people to acknowledge as such, but a mortal sin for white people to do the same . . Why? Because of state racial ideology).

State ideology (and IDEOLOGY, with its spurious claim to moral authority, which anyone in public life needs to be associated with, is what this is really all about) insists that “race doesn’t matter”, or even exist, is just a “social construct”, of importance only to evil “racists” like myself.

Only race and ethnic origins clearly DO matter. Not in the way that genuine racists believe they do, but because central to any deep and meaningful sense of both personal, and group, i.e. national, identity. Which is why the state, which legitimises itself and its political elite by deceitfully posing as our nation, need to demonise and suppress this truth as “racist”.

My bold. This guy is clearly a fascist fruitloop. Paranoid, delusional, hysterical and prone to hyperbolic flights of fancy, he always attempts to link skin colour to culture. Notice also how he attacks the idea of ‘race’ as a social construct. This is one who believes that ‘race’ is ‘biologically determined’ but if that’s the case, so are congenital diseases like Huntington’s  Disease. And eye and hair colour? They’re biologically determined too. Yet he wouldn’t demand that we keep the purity of our ‘natural’ British hair colour (whatever that is). Say NO to dying/colouring your hair!

If time travel were possible, I’d like to send Hicks back to Roman Britain just to see how he reacts. Better still, perhaps he should be made to take a DNA test to determine what his ‘racial’ origins are. We’d probably find that his ancestors are a mix of Arabs, Jews and Africans.

Anyway, back to Heaver. Here’s his opening gambit:

Vast swathes of the British political establishment now seem to have their heads buried so deep in the sand I’m surprised they know whether it’s day or night. We stand as a country buried in hundreds of billions of pounds of debt, with a government still spending vast amounts more than it raises, and yet the inevitable pressures are set to continue. Pressures which will be of our own government’s making.

For someone who wants to stand as a UKIP candidate for the European Parliament, Heaver is remarkably clueless about state finances. All governments borrow money and even if the present government says it’s “reducing the debt”, they’re lying and lying badly. Of course, the majority of people are clueless when it comes to state finances and will believe anything that someone with a posh accent tells them to believe. “We’re reducing the national debt”, they’ll say.  Yeah? Prove it, then. “Er, I meant the deficit”. Oh? Show me, then. “Look over there! Migrants are coming to take our jobs”! Yes, that really is the best they can do.

Here Heaver repeats his party’s scare story about the UK being ‘flooded’ with immigrants from Romania and Bulgaria in January. He tries to sidestep this in the opening sentence of the following paragraph:

Talking about mass migration is a silly game of scaremongering, say many of those in Westminster. Yet today we find out that once again, they are wrong. No fewer than 200,000 Roma are already in Britain and that’s before the doors open to Romania and Bulgaria next year.

Realising someone may come along an accuse him and his dreadful party of anti-Roma prejudice, he offers this insincere disclaimer:

I don’t want to demonise the Roma. These are often vulnerable people – who inevitably require resources that we simply haven’t got. Healthcare, schooling, social services – there was even talk on a Channel 4 News report last night of advice on jobseeker’s allowance.

“I don’t want to demonise the Roma”, he tells us but he’s going to anyway.

His next paragraph opens with an appeal to ‘common sense’ in which he cites the ubiquitous but somewhat anonymous ‘man-on-the-street’:

The man on the street can see it how it is: we are a country with one million young people unemployed. Half of our young black males are out of work. Our resources are not stretching far enough for those already here. Committing ourselves to providing for many of those who chose to come is madness. The numbers don’t stack up and nor does the moral argument.

He ends the paragraph with an appeal to moral authority. These people love their logical fallacies.

Instead of proposing sensible solutions, like a reduction in the working week or providing real jobs and training, Heaver – like any Kipper – resorts to the easy solution of scapegoating. Just join the dots and feel the hate.

As I write this, I’ve noticed that Hicks has posted another massive comment that repeats what he said in the first comment. He’s desperate to sell his book. Don’t buy it! Heaver is just as desperate, but in his case he wants get elected, take EU money and spend all his time doing nothing like the rest of his party’s MEPs.

UKIP aren’t popular in Scotland and they may as well not bother visiting. Their performance in recent elections there has been woeful. In the last Holyrood elections, UKIP polled less than 1%. Clearly the Scottish people can see through UKIP… unlike those English people who turned out to put an “X” next to the name of some local crypto-Falangist in Rotherham. Shame on you, England! Shame on you, Rotherham!

Yesterday, the party leader, Nigel ‘The Spiv’ Farage, was campaigning on behalf of his candidate in the Aberdeen Donside by-election, when he was forced to seek shelter in the Canon Gait pub. Here’s the video.

This video clip is better.

Naturally, it fell to UKIP’s media spin artists to talk down the Scots’ distaste for far-right politics by turning this into a story about “nasty Lefties” versus “Our Nige”. Michael Heaver, writing for the Daily Telegraph tells us,

The far Left sank to new depths today by hounding Nigel Farage in Edinburgh today as he attended the launch of Ukip’s by-election campaign for Aberdeen Donside.

The “far Left”? Laughable  The Scots don’t have time for UKIP, Farage and their shenanigans. The far-right have always done badly in Scotland; have a look at the BNP’s polling figures if you don’t believe me. This is a country where even the Tories are thin on the ground. That should tell Heaver something, but he isn’t having it.

After all, this is a rare politician who is all too happy to welcome even those hostile towards him into public meetings, so they can make their points in a controlled manner that allows room for sensible democratic debate. Those who hate Farage can say why – and he will give them the courtesy of a response. Not all politicians do that; he should be respected for it.

Heaver is delusional. He thinks Farage’s ‘bloke down the pub” schtick is a vote winner north of the border. The Scots aren’t fooled by it.  In in the following paragraph he heaps delusion upon delusion. It’s bloody embarrassing.

None of this would have happened if the far Left wasn’t so rattled. Their candidates usually finish nowhere – while Ukip are on the march in working-class areas, as we saw in South Shields. Why? Because Farage actually addresses the hopes and aspirations of working people who are feeling the economic squeeze harder than ever, thanks partly to open-door immigration. The far Left prefer to scream about their latest model for economic suicide.

Heaver tries to comfort himself with his party’s second place showing in South Shields but he still can’t explain why UKIP does so badly in Scotland. Notice how he says, “Farage actually addresses the hopes and aspirations of working people”. Hilarious. Furthemore, it isn’t the “Left” who are rattled, it’s their ideological brethren, the Tories, who are rattled.

It should surprise no one that Heaver describes himself as a “political commentator who campaigns for UKIP”.

After cowering in the Canon Gait, Farage was whisked off in a police van. I would have preferred to have seen him packed off in a prison van and sent to HMP Shotts quite frankly.

One Kipper who ought to be in Shotts is someone who calls himself “BHAFC Patriot” (@lawrenceV) who tweeted this. Hat tip, Still Laughing at UKIP (SLATUKIP) on Facebook for this. 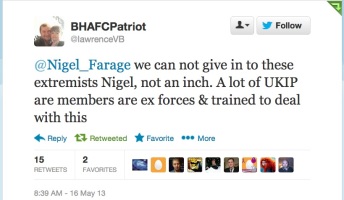 This is a worrying sign: a Kipper calling for some form of paramilitary protection for Farage and his gang. It sort of reminds me of the Brownshirts. The account has been mysteriously suspended.

On the BBC’s  Good Morning Scotland, Farage tried to spin this incident as “anti-Englishness” but comes unstuck when the interviewer drills into his feeble argument. He refers to the protesters as “fascists”. That’s rich coming from a Falangist. No? You can listen to the interview here. Farage hangs up when the questions get too uncomfortable.

Finally, here’s why UKIP will never do well in Scotland. Again, hat-tip to the SLATUKIP Facebook page. These are tweets from Ron Northcott, a UKIP candidate.

Nice people, eh?  By a strange coincidence, Northcott’s tweets have also disappeared. He claims that he’s been “hacked”. Yeah, sure you were [rolls eyes].