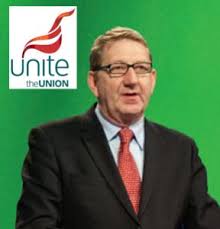 Well done, Len McCluskey, for his article in yesterday’s Guardian. MCluskey the recently elected general secretary of the union Unite penned this blog on the paper’s Comment is Free section.

The response of trade unions will now be critical. While it is easy to dismiss “general strike now” rhetoric from the usual quarters, we have to be preparing for battle. It is our responsibility not just to our members but to the wider society that we defend our welfare state and our industrial future against this unprecedented assault.

Early in the new year the TUC will be holding a special meeting to discuss co-ordinated industrial action and to analyse the possibilities and opportunities for a broad strike movement.

The paper produced an editorial which was quite possibly written by Matthew Parris’s partner Julian Glover (not the actor).  The piece, titled “Trade unions: leading nowhere” is nothing short of a vicious sub-Thatcherite attack.

It may not be a bad rule of thumb that anyone who thinks the term “Con-Dem” is a clever description of the coalition, who uses “Blairite” to dismiss all those on the left who think winning elections is important, and who describes strike ballots as “anti-union”, is someone with nothing interesting to say about any of them.

Groan. But it gets better

But the public does not want an unreformed welfare state, a lame duck industrial sector or trade unions that seem more concerned with overthrowing governments than representing workers’ interests democratically. It wants welfare, work and industrial democracy that are relevant to today’s world, not that of our grandparents.

So the author of this article thinks that the welfare state and everything that goes with it is what? Not modern? I find it irritating the way some writers will make great claims to modernity only to be revealed as dogmatic reactionaries who would like to see us return to the 19th century with its notions of deserving and undeserving poor.

It isn’t clear what Glover is saying here. He’s in some sort of funk

The labour movement is now in a minority. A large majority of the public are not in unions and do not vote Labour. There are millions in this majority who nevertheless feel threatened by cuts, who fear for the future of the economy and who think the government is too doctrinaire – but who do not approve of increasing deficits, who accept that sacrifices have to made (and shared fairly), who approve of the trade union laws of the 1980s (even if not of Mrs Thatcher), who think Labour can learn positive as well as negative lessons from Mr Blair, and who are not excited by battling the police or a new wave of strikes. Mr McCluskey’s priority ought to be to reach out to these people, showing he understands their lives and looking for innovative ways of addressing their anxieties. Instead, like a true Bourbon, he sadly sounds as if he stopped thinking in 1979. What a waste.

I think Glover has missed something here. In fact, he seems to have been living out in the Kuiper Belt for the last couple of months. The anti-cuts movement is united and is growing.

There is a letter of support for McCluskey here.

The Labour Party leadership also slapped McCluskey down. The Tory press, meanwhile, printed the usual mixture of bile and spittle,

The Daily Mail advised the unions that they faced a “threat of anti-strike laws”.

David Cameron is being urged to draw up plans for emergency anti-strike laws to prevent militant trade unions holding Britain to ransom.

Senior members of the Government are now understood to be urging the Prime Minister to draw up contingency plans for a crackdown on reckless industrial action.

Mr Cameron held a historic face-to-face meeting with union bosses in Downing Street yesterday over mince pies and coffee, at which he told them he wanted a ‘constructive dialogue’.

Rest assured, this wasn’t beer and sandwiches. Accompanied by a photo of Charles and Camilla’s chance encounter with republicanism, James Kirkup’s article in the Torygraph says,

Mr McCluskey’s rhetoric may raise tensions between the Coalition and the unions, but there was little public response from ministers.

Privately, several Cabinet ministers are pressing for action to toughen trade union laws. But the Coalition is determined not to be seen as instigating conflict with unions.

Rather than making public statements, the government will simply leave any public brickbats to their lackeys in Fleet Street.

Miliband must be truly grateful for this opportunity to stand up to the unions just before the political season enters its holiday hiatus. It won’t be to McCluskey’s taste, but he’s done the Labour leader a real favour.

McTernan seems to have forgotten Miliband’s speech to conference. Labour’s leadership won’t be supporting the anti-cuts movement any time soon.

The Tower Hamlets mayoral election happened last Thursday and to look at Kennite’s blog today, one could be forgiven for thinking that it still had weeks to go. Today’s sensational headline is “Luftur Rahman: finally, this story is picking up steam”. Shouldn’t that be “building up [a head of] steam”? or “Picking up traction”? They don’t make journalists like they used to…anyway, Gilligoon’s blog is more of a hatchet job on the Labour Party and an attack on Dave Hill than it is an attack on Rahman.

This morning, the Guardian’s Julian Glover joins in, calling the election of the “discredited” Rahman “a modern local government catastrophe.” The paper’s interest is particularly welcome, since the Guardian’s London blogger, Dave Hill, has sometimes seemed a little out of his depth on this story.

No, Kennite, Hill isn’t out of his depth, you just don’t have much of a story and are trying to wring the last drops from it. Which reminds me, Dave Hill and Julian Glover have a different take on this…in fact, in spite of what Kennite says, the crux to Glover’s article is this,

This could be written up as a disaster for Labour, and it is. The party has ham-fistedly tried to overrule its local party and ended up giving ammunition to critics of east London Bangladeshi politics while losing the election.

But this is the tricky side of localism. If a community behaves and votes in ways that a national party believes is wrong, what right does it have to intervene? And even if it has the right, how can it be done? Ken Livingstone’s election as an independent mayor – and his backing of Rahman – shows you can’t easily impose local choice from above.

Gilligan decided that bit wasn’t worth mentioning and went straight for the part of the article where Glover says “I wish Rahman hadn’t been elected”. Kennite also missed this paragraph,

The second catastrophe took place decades ago, when the Borough of Poplar, the bravest and proudest council Britain has seen, was subsumed into the mess of east London politics.

But the paragraph that proceeds the one I just quoted from Kennite is quite interesting,

The Standard’s deputy political editor, Paul Waugh, wrote that “Neil Kinnock spent years in the Eighties trying to break the London Labour Party from the grip of the ‘loony Left.’ Today’s leader’s problem is how to root out corruption and extremism among some Bangladeshi supporters.” And the paper’s leader article called Lutfur’s election “a new low for London’s most rotten borough.. plagued by Islamist extremists.”

Ah, this would be the “loony left” that stood in opposition to Thatcher’s cuts and the same “loony left” that was a concoction of the right wing press? I’m willing to bet that Gilligan believes the “Baa Baa Black Sheep” story to be true. This isn’t the 1980’s yet Kennite continues to live in the Thatcherite past. Desperately short of ‘loony left’ councils to savage, he goes for the one thing that makes for sensationalist headlines in today’s paranoid world: allegations of Islamic extremism. I also noticed that Kennite has altered his language regarding Rahman. Instead of referring to him as an “Islamic extremist”, he now calls him a “fundamentalist ally”.

I wonder if Gilligan remembers Tower Hamlets when it was run by the Liberal Democrats? I’ll bet he doesn’t. He was making a nuisance of himself at Cambridge.

Finally, here’s a comment from Julian Glover on his article,

Thanks as ever for reading the piece.

It’s been a strange election in Tower Hamlets – but not the first. More than most places, parties are superficial: the battles are within them (and especially Labour these days) are as big as between them. Perhaps that simply exposes the lack of real difference within the mainstream.

My colleague Dave Hill has followed politics in the borough far more closely than I ever could – really recommend reading his blog here:

Hmmm, that doesn’t sound as though Glover thinks Hill is “out of his depth”. It sounds as though Kennite is being bitchy – again.