At Nowhere Towers, Brendan O’Neill is known as one of the Telegraph’s worst bloggers (James Delingpole is the other one). A Murdoch lackey and an acolyte of The Great Furedi, O’Neill rails against anything that looks vaguely left-wing and this  is in spite of his repeated insistence that he’s a “man of the Left”. Is he a hypocrite? Yes, he is.

Yesterday, O’Neill penned a blog with the title “What’s fuelling the food bank frenzy? The hunger for publicity for anti-poverty activists”.

O’Neill knows what his readers like and they like anything that puts the poor and the needy in their place. They also like their ideas half-baked and O’Neill knows this and plays them like a fiddle.

Here’s my theory, for what it’s worth. Today’s food banks are not fuelled by the needs of the poor so much as by the needs of charities and campaigners. I think the main beneficiaries of the fashion for opening food banks, and for press-releasing these openings to every media outlet in the land, are the poverty industry rather than the poor. The poverty industry is made up of those campaigners who depend, for their very existence, on the idea that there exist hordes of helpless, hapless poor folk – and so the more these campaigners can fuel that idea, the better. Just consider how loose is their definition of poverty.

“Here’s my theory” he says. The trouble is, Brendan, it isn’t a “theory”; it’s a collection of prejudices strung together like diamante pearls. Furthermore, there is no “poverty industry”. That’s blatant hyperbole. What O’Neill is saying is that those who help others are to be despised. So the food banks, which many people rely on, are just publicity fronts? Did I get that right? Yes, I did.

They define “food poverty” as “the inability to afford, or have access to, food to make up a healthy diet”. But who defines what is a healthy diet? If a family can afford unhealthy foods – like cheap white bread, processed meat, beans – can they still be said to be suffering from “food poverty”? In these campaigners’ eyes, yes. Using various modern and ridiculously stretched definitions of poverty, the Trussell Trust, which runs most of Britain’s food banks, says 13 million people in Britain are living in poverty. They mean relative poverty – effectively “not being as wealthy as others” rather than “having nothing”. For them, the important thing is not having a serious debate about living standards in the 21st century but rather promoting the Dickensian idea that millions of people are poor, desperate and starving.

With the rising cost of fuel, travel and foodstuffs, combined with stagnating wages (stagflation), life for the low-waged and those on benefits is tough, but you’ll get no sympathy from O’Neill who thinks poverty is a leftist conspiracy. He nitpicks over the definition of “food poverty” but he hasn’t actually produced an coherent argument to challenge it. Instead he tells us that poverty is a “Dickensian idea”; old-fashioned and no longer ‘hip’. In the last sentence, he shows us that not only is he spiteful and mean, but he’s in denial.

Now we come to the comment of the week. This one is from “MHammer47”, whose class hatred oozes from every word of this comment: 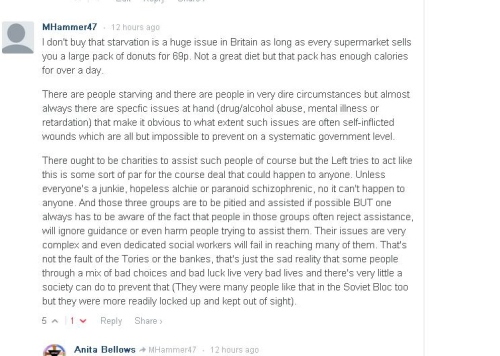 “MHammer47” channels Marie Antoinette by saying “let them eat donuts (sic)”. They’re only “69p”. Living on doughnuts will lead to serious health issues but for people like this, such things are incidental; mere collateral damage.  For MC Hammer, finding oneself in dire financial circumstances is about making “bad choices”. If only it were that simple.

There’s an old saying that Hammer and O’Neill need to learn and understand: There by the grace of God go I.

It’s pretty much as you’d expect from a member of the LM Network. Like his fellow LMers, Brendan O’Neill talks complete rubbish about nuclear power and claims that the “debate over nuclear power is being driven by holocaust-hungry doom-mongers”.

The response to the ongoing problems at the Fukushima nuclear reactor in Japan confirms that catastrophists have colonised the debate about nuclear power.

Ah, but in this blog he hasn’t actually put forward a decent argument in favour of nuclear power. Maybe he should have a look at this blog and accompanying video from Adam Curtis…but I know he won’t. LMers always know better than the rest of us.

But O’Neill doesn’t seem to be taking sides. In fact, he appears to be trolling. He uses compound words like “apocalypse-mongers” and “holocaust-hungry” to describe those who have concerns about the dangers of nuclear power – and these are legitimate concerns too. But that doesn’t bother O’Neill. With words like “doom-mongers” he ought to be writing for The Sun or The Daily Star. He’s actually the editor for LM’s  Spiked Online.

Free speech is LM’s obsession but their idea of free speech is about having the freedom to talk nonsense for the sake of provocation (they would describe it as ‘stimulating’ debate). Besides, they’re adamantly opposed to free speech in their own ranks. Supporters (as opposed to members) must obey the diktats of the leader, the Great Frank Furedi.

Here’s another snippet from his blog

Vastly exaggerating the problems there, by inaccurately comparing the shaken plant to Chernobyl and even shamelessly using the H-word (Hiroshima), they opportunistically argued that we must “call time on the nuclear age”. CND rallied its ageing troops for a protest outside Downing Street, waving placards that said “no nuclear” in both English and Japanese (nice). For some, the potential for a radioactive meltdown – more imagined than real – confirmed that humanity has gotten too big for its boots and must learn to be more eco-meek. “We cannot master nature, nature rules us”, said the leader of the German Green party.

Personally I find it ironic that Japan, the only country to have been subjected to the full horrors of nuclear warfare, has embraced the atom in the way that it has. This is something that O’Neill has omitted in his haste to condemn the detractors of the nuclear power industry. You can’t let a few facts get in the way of a good troll. Now can you?