It seems my suspicions were correct. Apart from being an EDL supporter, Ms Chetrit/Shitrit (it’s a Sephardic name in case you were wondering) is also chummy with Pamela Geller of the infamous Atlas Shrugs website.

The first bemoans Geller being barred from a synagogue. Notice the UKIP icon in the corner of her profile photo. Interesting? No? 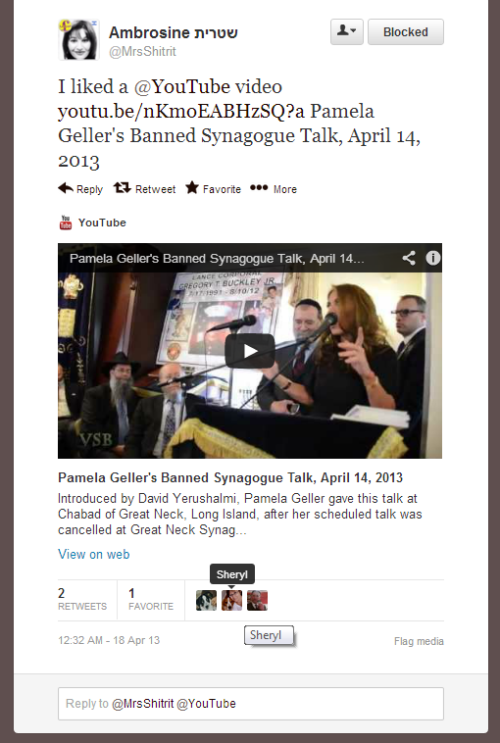 The second adopts the “if you aren’t with me, you’re with them” line that was much adored by George W Bush. 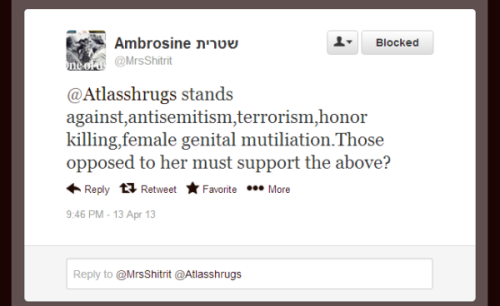 I think Kennite owes us all an apology for using the testimony of an EDL supporter as evidence. But I know that won’t happen any time soon. Gilligan has previously used the words of Daniel Pipes to support his ‘arguments’.

Geller publishes Kennite’s article in  full on her website.

She introduces the article by telling us:

I am very proud of Ms Chetrit, a twitter friend, she helped bring these jackals down.

Nowhere Towers will be watching both of them.

Once again we find that:

How long before this one joins the chorus of fakers with the “My account was hacked” cliché?

The recent murder of Lee Rigby and the spate of anti-Muslim attacks in the wake of the Woolwich tragedy has brought all manner of racists onto the Internet.  Therefore it was only inevitable that Kennite would join them and chip in with a poorly-researched piece of investigative journalism.

Yesterday, Kennite penned this article for the Telegraph. He opens his poison pen letter by telling us:

A controversial project claiming to measure anti-Muslim attacks will not have its government grant renewed after police and civil servants raised concerns about its methods.

Oddly enough, Kennite doesn’t think to give us an answer, instead he piles on the schadenfreude.

However, The Sunday Telegraph has now learned that even before Woolwich, the communities minister, the Liberal Democrat MP Don Foster, called Mr Mughal to a meeting and said that Tell Mama’s grant would not be renewed.

The organisation has received a total of £375,000 from the Department for Communities and Local Government (DCLG) since last year.

Yeah? I’m still none the wiser.

Is that so? Yet if other (non-Muslim) groups or individuals had been attacked online, that would be okay? I’m thinking here of Lord McAlpine, whose name was traduced on Twitter and who successfully sued for libel. I’m also thinking of those people who threaten others with violence on the Internet. Usually the police are supposed to act in such situations, yet here is Kennite actually laughing off online threats of violence. Let’s read on:

“Mr Mughal was giving data on attacks to DCLG which wasn’t stacking up when it was cross-referenced with other reports by Acpo [the Association of Chief Police Officers],” said one source closely involved in counter-extremism.

“He was questioned by DCLG civil servants and lost his temper. He was subsequently called in by Don Foster and told that he would receive no more money.”

I think I’d lose my temper too.

Further down the article, we find this:

In mid-May, before Woolwich, one Jewish activist, Ambrosine Chetrit, received a threatening letter from solicitors after she tweeted that “Tell Mama are sitting on Twitter on the EDL hashtag, threatening anyone and everyone whose comments they do not like about Islam”.

“Ambrosine Chetrit”? Anyone would think she was just an innocent Jewish activist. It turns out that she’s actually a supporter of the English Defence League (EDL). For a supposedly shit-hot investigative journalist, Kennite ignores one of the golden rules of his trade: check your facts.

Now before Kennite starts mouthing off about this woman being Jewish, I think we should remember that some Italian Jews supported Mussolini’s fascists. Indeed, the Zionist Revisionist Ze’ev Jabotinsky openly admired Mussolini. But what kind of “activist” is Chetrit/Shitrit? It isn’t clear. Her Twitter profile tells us that she’s a,

A “Likud” violinist? What’s that? Are they any different to any other violinist or do they just play songs that are pleasing only to a Likudnik’s ears?  Her tweets have, erm, been “protected” too. What’s she got to hide, I wonder?

Kennite also cites Atma Singh, whom he describes as “a former race adviser to the then Labour mayor of London, Ken Livingstone”. That’s the same Ken Livingstone, whom Gilligan spent the better part of 8 years smearing by the way. Apparently Mr Singh and Ms Chetrit/Shitrit had received letters from Tell Mama that threatened them with legal action. So who sent these letters?

Notice how Kennite casually tells us that Farooq Bajwa is a “solicitor” who has worked for ” a number of Islamists and Islamist sympathisers”. Remember, in Gilligan’s mind, anyone who complains about attacks against Muslims is an “Islamist sympathiser”.

In the last couple of weeks,  attacks against Muslims have escalated. Last week, a Somali cultural centre in Muswell Hill was set ablaze. The attackers left the letters “EDL” daubed on the wall. An Islamic boarding school was attacked in Chislehurst a couple of days ago. The Metropolitan Police have said that anti-Muslim attacks have increased from one a day to eight a day and have stepped up patrols around Islamic sites. Yet all Kennite can do is make fun and play to his gallery of bigots and halfwits. By laughing such things off, he gives succour to EDL and BNP thugs and encourages further attacks. Let’s face it, the EDL and the BNP are indiscriminate and will attack anyone who they think looks like a Muslim. In other words, anyone with brown or black skin will become a target. Are you happy with that, Kennite?

To be honest, Gillie’s story is an obfuscatory mess. On the one hand, he crows with delight about Tell Mama being denied funding and, on the other, he cites an EDL sympathiser.

For a man who claims to “hate” racism, Kennite tends to use phrases like “the white establishment”. If that isn’t an allusion to deeply held prejudices, then I’m Winston Churchill, who really was a racist.

Shitrit’s Tweets are no longer protected but she has removed the offending remarks. Typical.

She’s posted these instead

I am also a Jewish mother who advocates for Israel on twitter. When I receive harrassment, and anti-Semitic tweets that is a crime.

I forgot to say I am a proud zionist. << OR IS THAT A CRIME NOW?

Hysterical. It looks like someone’s rattled her cage. I wonder who? I also wonder if she’s familiar with Pamela Geller? Call me suspicious, but I don’t think this woman is Jewish either.