So far most of the crap cycle lanes and paths that I’ve featured on this blog are those in Hammersmith and Fulham, the government’s ‘model’ borough (that helps itself to money from your bank account without a Direct Debit mandate).

This cycle lane is truly dangerous. It isn’t controlled by lights and practically invites cyclists to ride out into a very busy one-way street.

The shared cycle path that this erm, lane, leads to is only partly usable since the builder at the car park opposite have closed the pedestrian side of the pavement. If you should manage to get to the other side, you will be greeted by irate pedestrians who think you should cycle the wrong way up the street and not on the, erm, pavement. 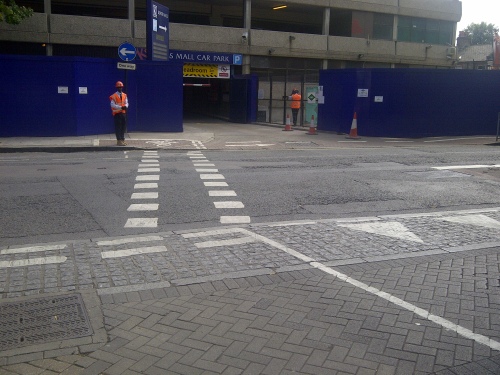 Complete and utter incompetence. When you get to the other side, you have to give way to motorists entering the multi-story car park.

Even though I attack the Hammersmith & Fulham Tory ruling group in this blog, this cycle lane was built (is that the right word?) under the Labour administration, thus proving that politicians of all political stripes only pay lip service when it comes to the needs of cyclists.