What happened to the French prosecutor’s report into Nazi Boy Burley? 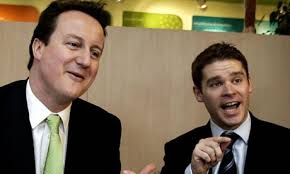 Is Cameron shielding Burley? Pic courtesy of The Guardian

Yesterday, as I watched the Benefit Uprating Bill debate on television, I noticed the number of Tories who lined up to repeat the same canards about the unemployed and those on benefits. I was struck at how similar their arguments were to those made by the Nazis when they used Jews as scapegoats for the Great Depression and much else besides. So it came as no surprise to me when Aidan “Nazi Boy” Burley, trotted out a series of unsubstantiated anecdotes about “benefit cheats”, which he presented as “facts”.  Arrogant and smug, he seemed to revel in the boos of the opposition benches.

But then, I thought, “What happened to the investigation launched by French prosecutors over a year ago into his toast to the Nazi Party at his pal’s stag party”? It went a little quiet, didn’t it?

I found this article in The Jewish Chronicle from 11 December 2012. It is the only paper that continues to ask questions of Burley and the French prosecutor’s investigation.

The Conservative Party is being urged to release a much-delayed report into the conduct of MP Aidan Burley on an allegedly Nazi-themed stag party, a year after the trip occurred.

The Cannock Chase MP was sacked as a Parliamentary Private Secretary last December after it emerged that a guest wore SS uniform at the ski-resort party in Val Thorens. There were also claims that other guests toasted SS leaders.

At the time, after Mr Burley expressed regret, the Prime Minister asked for a fuller investigation of the matter in Britain, a summary of which the Conservative Party promised would be published by the end of February 2012.

But a spokesman for the party said this week that any findings would not be made public until the French prosecutors completed their investigation.

“There will come a point once that is done when we will release it in some form,” he said. “Until we hear the investigation is wrapped up the party won’t be saying anything further.”

The Cat would like to know why the report has been delayed. Has the Conservative Party been leaning on the French magistrates or has the report been deliberately suppressed to avoid embarrassment? Whatever the case, I think we need to know.

Jennifer Lipman of the Jewish Chronicle also reminds us that,

The Cannock Chase seat currently held by Conservative MP Aidan Burley, who faced national embarrassment in 2010 after reports surfaced of him at an allegedly Nazi-themed stag party, is at number 50. His opponent, Janos Toth, is the son of a non-Jewish Holocaust refugee who fled Poland to escape the Nazis.

You will recall that Burley was accused of texting and dozing off while he was attending a Holocaust Memorial lecture. The voters of Cannock Chase deserve better than this lying, Nazi-fetishizing toerag. Come 2015, they will have the chance to vote him out of office and replace him with someone who is more sympathetic to Holocaust victims. Let’s also hope that, in the meantime, the French prosecutors slap him with a custodial sentence.  Now that would be real justice.