Leveson and the Tory press’s myth of free expression 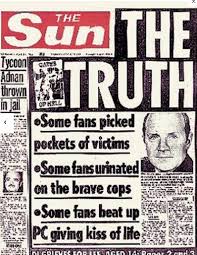 Lies are what passes for the truth in Tory media land.

The Tories and their pals in the media are fond of telling us that we have, in this country, something called a “free press”. This is a lie and those who believe that Leveson will magically remove this “free press” have been tricked into believing that by the spectacle.

No Tory newspaper proprietor or its hacks wanted Leveson in the first place. The journalists who write for these papers have mediated the notion of a universal free press in Britain to the public, many of whom have been taken in by the hacks’ complaint that it will spell an end to a free press that didn’t exist in the first place.

The other fear is that the Leveson Report will suddenly prompt a rash of repressive legislation that will affect bloggers but that’s emotional blackmail on their part and they know it. But I ask you this: under the current system, do you think it is right that British newspapers can lie to the public under the aegis of a free press? Furthermore, do you think it’s responsible for a newspaper to print articles they know to be entirely false?

Under the current self-regulatory system, if a newspaper prints a false allegation about a member of the public, what do you think happens? I’ll tell you, not much. The newspaper in question is required to print a retraction. That is all. The wronged party is not compensated and the paper is free to print more lies. The Press Complaints Commission (PCC) is run by the newspaper industry and even then, some papers don’t participate. Northern & Shell withdrew their subscription last year, which effectively means the Daily Express and OK! can print any old shit it likes. Furthermore, the PCC has also been chaired by former Tory ministers or sympathizers. Do you really think that’s right?

Political Scrapbook tells us that David “Shoot the bastards” Blunkett (who’s also a member of Labour Friends of Israel) and the YBF’s Conor Burns had a letter drafted for them by a Daily Mail executive. There’s your free fucking press.

If freedom of the press means telling lies for the sake of keeping one political party in power over another, then that isn’t a free press. That’s no better than the press in the Soviet Union or Nazi Germany. In fact, it’s worse because they lie about the press being free when it clearly isn’t.

According to Reporters Without Borders’ Freedom Index, the UK is number 28. That’s 3 places behind Mali. Even Namibia has a freer press than the UK.