Pickles plays the Hokey Cokey with the YBF 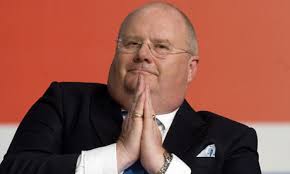 In a Guardian article from March 2010, Eric Pickles, then the Tory Party Chairman, said that he was “distancing the party from the Young Britons Foundation”.

If that’s the case, Nowhere Towers would like to know why he still turns up to address the young and not-so-young shock troops of the rabid right? Presumably, he’d tell us that he’s attending such meetings in a “personal capacity”. Yeah, okay, if you say so.

The Sontaran  also has close contact with the Trade Union Reform Campaign led by Young Turcs (geddit?) Aidan Burley and Mark Clarke, the YBF’s  “Outreach Officer. In fact, as Political Scrapbook tells us he’s attending this evening’s relaunch of TURC.

Burley was involved in an embarrassing Nazi incident just before Christmas that cost him his job as Justine Greening’s bag carrier. Oddly enough, Nazis didn’t like trade unions either.

So is Pickles in or is he out? Will he shake it all about? Ugh. That’s one mental picture  that I don’t want to see again.

One response to “Pickles plays the Hokey Cokey with the YBF”