Postcards From The Barricades (Part 9) 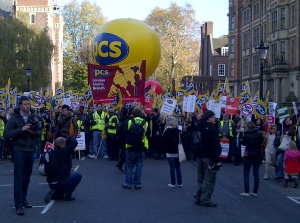 As usual, I’m listening to The Redskins on my mp3 player to get me in the mood for today’s march and rally in defence of public sector pensions. But the rally is about more than pensions: it’s about jobs and security. It’s also about the cuts that are being imposed upon the lowest paid workers. In most other circumstances, when a bigger person picks on a smaller or weaker person, the bigger person is called a “bully” and rightly so.  Bullies have become very much a feature of light entertainment schedules in recent years. I’ll talk about that a little later on. The coalition government and its chums in Fleet Street are the bullies. No mistake there. There are 23 millionaires in the cabinet, it’s not as if they’re going to have to make a choice between food and heating this Winter.

The BBC News Channel spent the entire morning, interviewing as many right-wing voices as they could muster in advance of the marches and rallies.  All of them repeating the same tiresome “This strike is wrong, blah, blah, blah…”. I don’t have time to listen to much of it as I’m too busy trying to get out of the door in good time for the march.

The man sitting next to me on the Tube is reading a copy of The Times, the headline reads “Osborne Strikes First”.  Ha ha, very funny. I alight at Holborn. I hate this station because the exit from the Piccadilly Line northbound platform is far too small. It’s like an inadequate storm gully that’s blocked with a few leaves and twigs, which overflows at the slightest hint of rainfall. As soon as I step out of the station, I’m swept along by a passing group of marchers down Kingsway. I arrive at Lincolns Inn Fields. It’s crowded and there are certainly more people here than the BBC’s Jon Sopel estimates. There are a few children about too. Here are a couple of kids getting into the spirit of things. 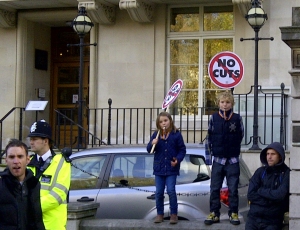 I walk along the southern side of Lincoln’s Inn Fields, I can see some UCU balloons in the distance.  I spend a bit of time milling about, looking for people I know when I meet some familiar faces from UEL. One of them sees Dennis Skinner and shouts “Beast of Bolsover”! He smiles and nods.  Here’s The Beast scoffing a biscuit. 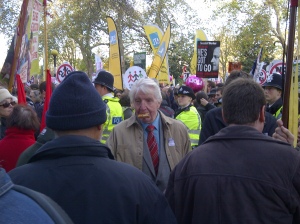 I can also see Peter Tatchell to my left but he has his back to me. We begin to make our way to Victoria Embankment,   I’m actually at the front of the march for a change. I took this picture of this rather funky looking float, I’d guess you’d call it.

The march proceeds slowly around Aldwych and onto The Strand. I find myself standing next to the BBC’s Mike Sergeant (yes, he is the son of John), who doesn’t seem to be doing much of anything. No sign yet of Paraig O’Brien. We’re finally allowed down The Strand. Lee Jasper cycles past me, he’s shouting through a loud hailer. 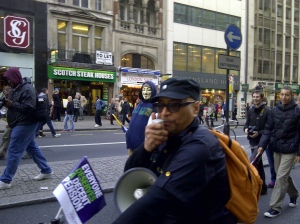 Either his bike is too small for him or the saddle is too low. At any rate, he shouldn’t be peddling with his arches. I walk past a load of scaffolding opposite Gilbraltar House, there are loads of photographers hanging from it. A security type says to them, “You realise it’s not fixed”. It looks fine to me; it would take more than twenty blokes to pull down this load of scaffolding. A few elephants, maybe… Security dude is being a spoilsport. Typical.

The French Confédération générale du travail, (CGT) have sent a delegation too. 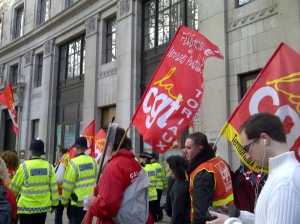 It is one of five such confederations and is considered to be the most moderate. They’re not what you might call militant syndicalists either, the CGT… then again, nor is the TUC.

The pace of the march seems to be dictated by the authorities. Is there someone somewhere who is timing all of this? Working out the average speed over the distance travelled?  My phone goes off. I find somewhere to take the call. I’m not one of those people who walks and talks on the phone at the same time. As I finish the call, I can overhear some bloke next to me say, “They look like civil servants” adding “The problem with these marches is they attract activists”. Spoken like a true Sun reader. No irony. Full of sneering contempt for his fellow workers.

We arrive at Victoria Embankment. The speeches begin. The NASUWT’s John Rimmer’s speech gets cut short. I’m not sure why. Maybe he wrote too much and ran out of time. I don’t know. The UCU speaker who followed spoke without the aid of notes and was passionate but didn’t venture beyond slogans. I miss most of Christine Blower’s speech because I’m being distracted by the whispered news that some form of direct action is going to take place near Piccadilly Circus.

Unite’s Len McCluskey tells us that there are 50,000 on the march. Not bad for mid-week.  He’s followed by Ken Livingstone, who reminds us that MPs, who work in the public sector receive a pension of £40,000 per annum. He tells us that suicides on the tube network have doubled because of the redundancies and the debt people have been saddled with. Mark Serwotka of the PCS closes the platform speeches. “You are the people that make this country tick”.  For sure, because without public sector workers, the bins wouldn’t be emptied. I can’t think of anyone who would sign up to the idea of taking their refuse to the dump themselves. “It’s time that the Labour Party got off the fence and supported this  strike”, Serwotka says. I agree. The message coming from the Labour leadership is confused. There are Greens on this march and yet I didn’t see a single Labour Party banner.

I get home to hear the usual nonsense about the strike. Gove assumes the role of a graverobber and fashions a narrative from bones of long-dead trade union leaders. It’s unconvincing and undignified stuff. He cuts a desperate figure of a man. All guff and no substance.

Later on The One Show, Jeremy Clarkson is asked for his thoughts on today’s strike. Here’s what he says,

Franco would have loved him. Pinochet too. He’s a bully and bullying has become Britain’s national pastime. Top Gear is as much about bullying as it is cars. Some of the nation’s current crop stand-ups rely on getting laughs by picking on the little guy. H L Mencken once said “Comfort the afflicted and inflict the comfortable”.  There by the grace of God and all that stuff. Clarkson thrives on his role of professional gobshite and all-round boor. But this time, he’s overstepped the mark. A wise man once told me that, “There’s no such thing as a joke”. I truly believe that Clarkson meant what he said. By the way, Clarkson is a pal and neighbour of Lord Snooty and Rebekah Brooks.

I’ll leave you with this picture of a man with a well-pimped wheelchair. 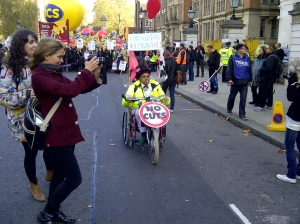 The fight goes on!