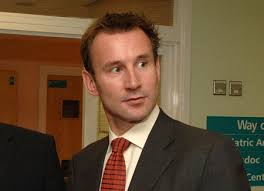 Jeremy Rhyming-Slang: Murdoch can count on him to do the 'right' thing

There are many right-whingers in this country who constantly moan about ‘BBC bias’. It seems to me that none of them actually pay any attention the BBC’s news output, particularly with regards to corporation’s reportage of the recent student protests. Throughout its history, the BBC has been more biased against the left and the working class than it has the right: the General Strike of 1929, the Battle of Orgreave Colliery are a couple of examples of this tendency. Then, in the aftermath of the 9/11, old footage of celebrating Palestinians was grafted onto current footage to help reinforce the myth that all Muslims hate America (this ignores the fact that there are Christian Palestinians). These are examples of real bias yet the right say nothing – and for obvious reasons.

Make no mistake, the right’s claim that the BBC is ‘biased against them’ is a nothing more than a manifestation of control freakery. They won’t be content until all the news media of this country reflects their views. Guido Fawkes blog tells us that “breaking up the BBC” will actually create a “plural media”. The subtext to this demand is that right-wingers like Staines want Murdoch to increase his stake in BSkyB. Murdoch already owns The Sun, The Times, The Sunday Times, The News of the World, Times Educational Supplement, The Times Literary Supplement and publishers Harper Collins.  Staines says,

The BBC must therefore be an even worse threat to “media plurality”, particularly when one considers that it is protected from fair competition by a state subsidy via taxation. Somehow this doesn’t worry the Guardian, which is hardly surprising because BBC News often feels like the broadcast arm of that paper. When one considers that the BBC overwhelmingly recruits from its pages the Guardian-BBC axis is abundantly clear.

Douglas Carswell chimes in with this

Creating a framework that allows local TV to flourish – and without public funds – would give a real boost to localism.  A patchwork of local TV stations across the country would help folk keep tabs on their ever more autonomous council – and their directly-elected police commissioner and mayor.

Besides, it would, as Guido suggests, give us a more decentralised, more plural media.

These TV stations will more than likely be bought up by larger concerns. This is exactly what happened to many local newspapers in the 1980’s which were bought up by larger publishing companies. As for a “plural media” how exactly will this be achieved by creating ‘local television stations’? ITV franchises like Anglia, Thames and Granada once provided quality local news until deregulation forced them to consolidate. Localism, my eye.

When the Broadcasting Act (1990) was passed, the Major government claimed that it would lead to more ‘choice’. 19 years after the Act was passed, it has led to dilution, repetition, dumbing down and a greater choice of rubbish. Television companies, including the BBC,  have been involved in a race to the bottom since the Act was passed. Commercial radio has fared even worse with much of the music output, for instance, duplicated across channels.  Interestingly enough the Act also provided a convenient loophole to protect Murdoch’s Sky which was defined as a “non-UK service”.

What the Tories and their supporters actually want is a supine media that disseminates their ideology and only asks polticians what Americans call ‘softball questions’. They want a British equivalent of Fox News which, in spite of its name, contains very little news and a lot of right wing opinion. Fox News, as Chomsky and Herman observe, is little more than an “unofficial ministry of information”. No doubt this is what Jeremy Hunt and his supporters want to see. Not content with having most of the newspapers on their side, they want control of the rest of the media too.

The last thing this country needs is to have the likes of Richard Littlejohn or Nick Ferrari elevated to the same status as Glenn Beck or Sean Hannity in the States.

Don’t let Murdoch get his own way. Please sign the petition.

One response to “Plural media or supine media? The right’s media claims don’t stack up”