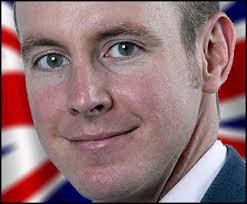 Hannan: he's being oppressed by the poor

If you didn’t laugh at the antics of the uberprivileged, you’d cry. The cuts in public spending will not affect the rich or those who earn 6 figure salaries but to hear them talk, one would think that the poor and the low-waged were about to burn down their homes.

Today, Desperate Dan Hannan launches a snide attack on Mark Serwotka, the general secretary of the PCS union. He describes Serotwa’s article as a “harangue”…and he has the brass neck to say that I don’t understand how to use the word “fulsome”?  Unintentionally funny or what?

It’s reasonable enough, I suppose, for trade unions to campaign against specific cuts that affect their members. But surely they can see the need for some reductions. The government borrowed 30 per cent more last month than the wastrel Gordon Brown did the previous November; more, indeed, than in any month since the National Debt was instituted in 1694 under William III.

A couple of things. First, a coherent argument for cuts hasn’t been made. Instead, we have been treated to the hoary old cliché that “We’re all in this together” when clearly that is a lie.  Second, Hannan talks about the national debt as though it was the fault of all those awful poor, low-waged and unemployed people. Hannan, like so many of his ilk, won’t do the decent thing and tell you where the current national debt comes from and how old it is. Instead, he and his fellow travellers want us to believe that the budget (structural) deficit and the national debt are one and the same thing. They are not.

The cuts won’t affect Desperate Dan or the 22 millionaires in the Tory-led government. Well, they may have to forego foie gras once a week but, hey, it’s no big deal. We’re all in this together. Right?

Hannan finishes with this

So far, private sector employees have seen a greater drop in their incomes than government workers. Yet it’s private sector workers who generate the revenue with which the state employs Mr Serwotka’s members. Such lopsidedness, I’m afraid, is not sustainable.

What Hannan forgets is that private sector workers aren’t as unionized as those in the public sector. The reason for that is fairly obvious. In Hannan World, trade unions are a monstrous evil that must be excised from the body-politic like a tumour.

Here’s a the Taxpayer Alliance (already exposed as a Tory front group) that Desperate Dan posted on his blog.

Striking should be outlawed in the public sector and in any private enterprise that constitutes part of the key infrastructure – such as power stations, airports, airlines.

There should be no such thing as a “right to strike” which materially impacts my right to go about my daily business. Nor should there be a right to withdraw a public service that I am required by law to pay for.

But I am happy to allow striking in the rest of the private sector because the free market will regulate it: if I cannot buy your widgets because your workers are on strike then I will buy them from your competitor.

Unfortunately we cannot eliminate all monopolies – there can only be one London Underground – so the “right to strike” rather than being an absolutist principle as the Left believe should take into account the type of enterprise concerned.